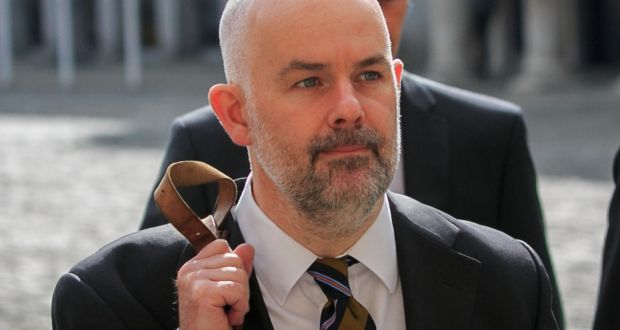 The crime and security editor of The Irish Times has said he never received a negative briefing about Sgt Maurice McCabe from a serving or former member of An Garda Síochána.

Conor Lally is one of eleven journalists identified by the former head of the Garda Press Office, Supt Dave Taylor, as persons he spoke to as part of an alleged smear campaign against Sgt McCabe.

He said he had respect for the work of the tribunal but also took seriously his work as a journalist and the duty to protect sources, so he had tried to come up with a way of protecting sources while also trying to aid the tribunal’s work.

“I am in a position to confirm that no member of An Garda Síochána, past or present, ever spoke to me about allegations of criminal misconduct about Sgt McCabe,” he said.

He was “extremely surprised” when he first learned that Supt Taylor had given his name as someone to whom he had given a negative briefing about Sgt McCabe.

He told Patrick Marrinan SC, for the tribunal, that it was in 2011, or possibly 2010, that he first heard that there had been an allegation of sex abuse against Sgt McCabe that had been dismissed by the Director of Public Prosecutions(DPP).

The tribunal has heard that in 2006 a woman called Ms D made an historical child sex abuse allegation against Sgt McCabe. The DPP said that the allegation, even if true, would not constitute an assault.

Mr Lally said it was clear to him from what he was told at the time that the allegation had been thrown out. He said the impression he got was that this event was when Sgt McCabe had fallen out with An Garda Síochána. “This was the start of it all.”

He said the information was not given to him so that he would be warned that “you need to be wary of him.” It was more “an explainer” as to how Sgt McCabe fell out with the gardaí.

He said that what he at the time considered to be a rumour, in fact turned out to be accurate.

Later, in 2013 or 2014, when Sgt McCabe began to develop a public profile, he learned that other journalists were privy to the same information.

Responding to Michael McDowell SC, for Sgt McCabe, Mr Lally said his information about the Ms D allegation did not come from An Garda Síochána or the Ms D family.

He said he got information about Ms D’s identity and address in 2017 on the day it was decided in The Irish Times that he should try seek to interview her. He found it “very easy” to get the information, which came from a source who was not a member of An Garda Síochána or a journalist.

By that stage, he said, the McCabe story was “toxic” and a lot of people had lost their jobs and he wanted it to be absolutely clear that the interview with Ms D had no connection with An Garda Síochána.

Mr Lally said he completely rejected Mr McDowell’s assertion that the article subsequently published and based on the interview, was “replete with untruths”.

Sgt McCabe is suing The Irish Times for defamation arising from the interview with Ms D, which was published in February of last year. Mr Lally continues his evidence on Friday.

Original article can be found at irishtimes.com

This site uses Akismet to reduce spam. Learn how your comment data is processed.