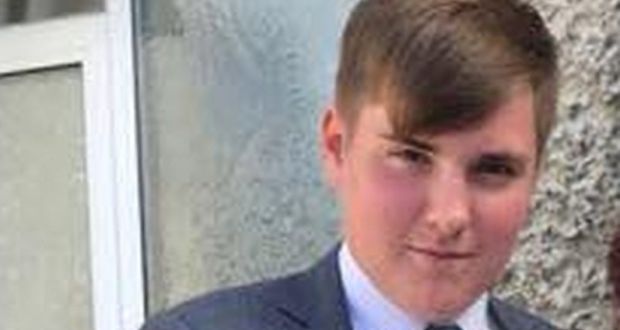 A candlelit vigil will take place in Dunleer, Co Louth this evening for student Cameron Reilly amid fresh garda appeals for information on the circumstances surrounding his murder.

The body of the young man was discovered in a field in Dunleer on Saturday morning.

He had visible injuries to his neck and gardaí are investigating the possibility he was strangled while in the company of a number of youths.

Gardaí confirmed on Sunday they are looking for Mr Reilly’s mobile phone. It was either stolen or removed before his body was found by a man out walking his dog around 8am on Saturday.

Garda Chief Superintendent Christy Mangan said said gardaí were appealing for information from the people who were in the area at the time, or who are aware of what happened, to contact them.

The body was taken to Our Lady of Lourdes Hospital in Drogheda where a postmortem was conducted by Deputy State Pathologist Dr Linda Martin.

On Sunday Mr Reilly’s mother, Tracy Glass, wrote on the Dunleer Parish Facebook page that the family’s “hearts are broken in a million pieces”.

She added: “My beautiful son love u to the moon and back.”

There has been an outpouring of support for the family and, at the request of the parish community in Dunleer, there will be a candlelit vigil at 8pm today.

On its Facebook page Dunleer Parish said, it would be, “an opportunity for quiet prayer, chant, lighting of candles and leaving of tributes. Please feel free to drop in for a moment to share your grief and to show solidarity with Cameron and his family.”

Cameron had just finished his first year studying Hospitality at Dundalk Institute of Technology and the president of the institute Michael Mulvey said: ”We are shocked and deeply saddened by the news about the death… On behalf of the entire institute, I wish to extend our deepest sympathies to his family and friends at this time. Our thoughts and prayers go out to them.”

“The institute will make every effort to support our students and staff affected by this tragedy.”

The institute’s confidential counselling service was open to all students, and its chaplaincy and students union were also available to provide pastoral support, he said. “We would ask our students to contact our student services team to access to these supports.”

Mr Reilly was out socialising with friends in the town on Friday night and was seen speaking to various groups of people.

Investigators are now focusing their efforts on tracking down and speaking to anyone who interacted with Mr Reilly in the hope they could have information about his killer.

Mr Reilly was last seen near Ardee Road at about 12.30am on Saturday morning.

“Investigating gardaí are appealing to anyone who was in his company or with information about his movements on Friday evening and Saturday morning to make contact with them,” a garda spokesman said.

Gardaí in Drogheda are also asking taxi drivers, bus drivers and anyone who may have dashcam footage from the Dunleer area from that time period to make contact with them.

Investigators are also keen to recover Mr Reilly’s missing phone which they believe could hold valuable clues, including about his movements on the night in question.

“We are particularly appealing for assistance from the public to locate Cameron’s phone, an Apple iPhone 8X (64GB) with a green hard back cover, space grey in colour. We would ask home and business owners in Dunleer to check their property including wheelie bins and waste skips. We would also ask anyone offered a phone for sale as described to contact us.”

Gardaí are also appealing for information, particularly to anyone near Shamrock Hill, Dunleer, between 4pm on Friday and 8.30am on Saturday morning.

Originally printed in the Irishtimes