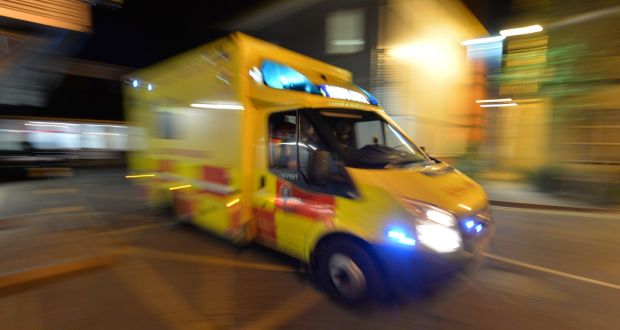 An ambulance paramedic was left stranded at a filling station in Co Laois after a disagreement with a colleague who drove off, forcing controllers to send another ambulance 50kms to collect him.

The HSE’s National Ambulance Service (NAS) has not answered specific questions in relation to the matter but has confirmed an incident occurred and that local management are working to resolve the issue.

The alleged incident occurred last Saturday night (July 22nd) as two Tipperary based NAS paramedics were returning to their base in Clonmel after completing a patient transfer call in Dublin.

According to sources, one paramedic (passenger) expressed concern about his partner’s driving in poor weather conditions and asked them repeatedly to slow down.

The driving paramedic is reported to have pulled off the motorway, into a filling station in Portlaoise Co Laois and dropped the crew member off before driving away again. This meant, with just one crew member on board, the ambulance was not available for emergency calls

After the paramedic was dropped off in Portlaoise, an ambulance was dispatched from Roscrea in Tipperary to collect him, taking another emergency ambulance and an advanced paramedic out of service.

As a result, North Tipperary was left without one of its three ambulances for several hours while the area’s rapid response unit was also off the road. This was because the advanced paramedic who should have been crewing the vehicle, was seconded to work on an ambulance in Roscrea that night.

It was this ambulance crew that was then sent almost 50kms from Roscrea to Portlaoise where they collected the stranded paramedic and transported him another 50kms to Urlingford.

Another ambulance service member, not believed to have been on duty at the time, then collected the paramedic in Urlingford and transported him back to his base in Clonmel a further 60kms away.

An ambulance service source said: “You couldn’t make this stuff up. It’s shocking and an absolute disgrace. Whatever happened between those two (paramedics), we are not a taxi service. Control should have sent a taxi for him not an emergency ambulance.”

“By taking an ambulance out of service and sending it on a taxi run, North Tipperary was left with one third of its ambulance compliment unavailable. It also meant that an advanced paramedic (AP), specially trained in advanced life support (ALS), was unavailable to respond to calls in North Tipperary. We understand that (AP) was sent to Roscrea to crew an ambulance there because they were short a staff member,” he said.

“It’s bad enough that the rapid response vehicle had been taken off the road so the AP (advanced paramedic) could be sent to crew an ambulance at another station, but then that ambulance was sent off on a taxi run. This is an irresponsible management of resources and an insult to patients and ambulance service personnel,” the source said.

The HSE has not answered questions in relation to the matter including whether an investigation is underway; whether a formal complaint has been made about the incident or whether the staff members involved are still on duty.

A spokesperson said however: “The National Ambulance Service can confirm that on Saturday 22nd July last, a disagreement arose between two NAS Staff, at the end of their shift. Local NAS management are working with the staff to resolve the issue.”